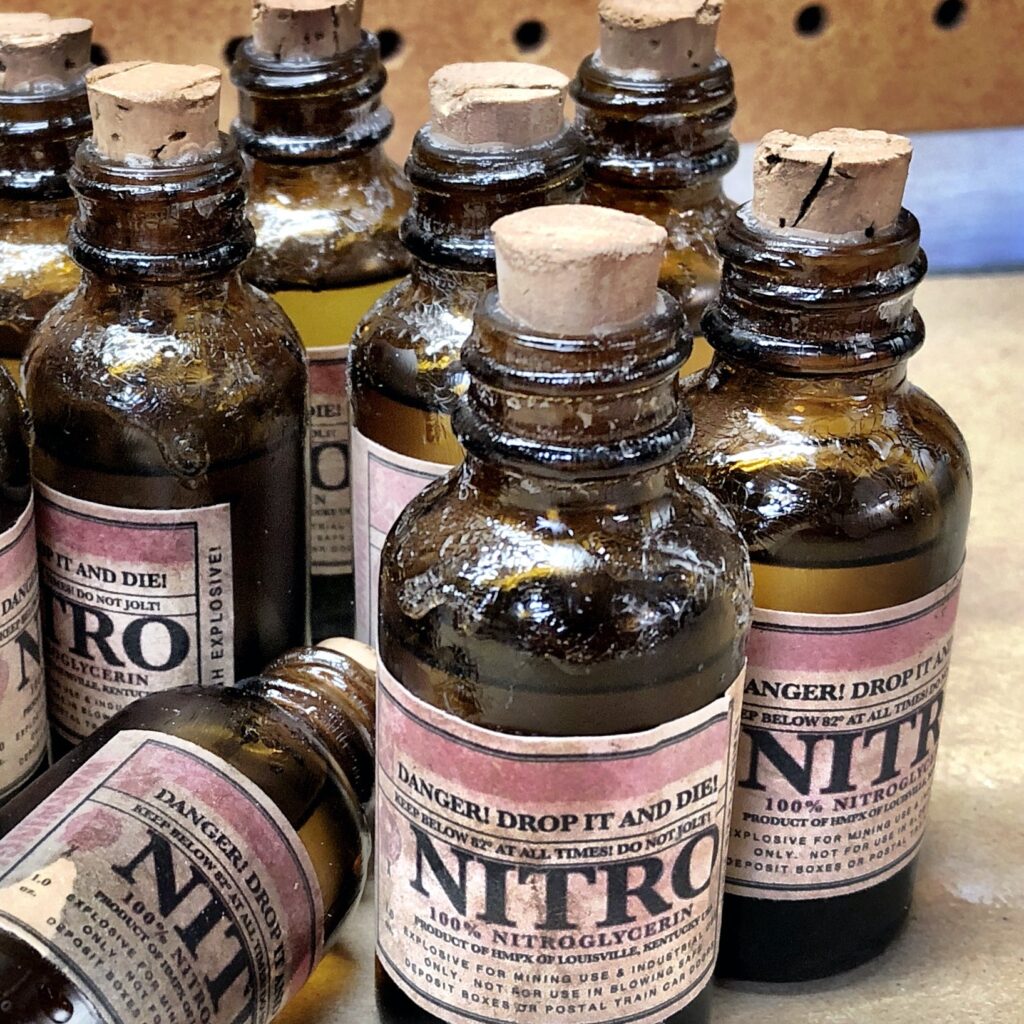 This one has been kicking around for a while. July of 2019, actually. And, I finished this project a few months ago, so I’ll call this a project that took place over about a year.  There was a show called Savage Builds starring Adam Savage of Mythbusters fame.  In an episode called “Nitro Explod-aganza”, he was, as you might imagine from the title using nitroglycerin to blow things up.

It was fun.  But, what caught my eye especially was when he was showing some of the bottles they were using. I took this shot of the screen:

At the time I was watching the show, I was amazed at how cavalier Adam was in handling the bottles, given how prone this stuff is to blow up! I came to believe that this was just a prop bottle, but at that point I wanted my own prop bottles of nitroglycerin! Why? No good reason. Mostly just curious whether I could build my own.

I started off by looking around the web and was surprised to find some google images of someone selling what was purported to be old bottles, but I didn’t believe they were really old. I suspected that they were simply props.

If you examine the labels, you’ll note that while not exact, the text and layout were very similar. The Savage Builds bottle was dark brown, more what I expected from something that was supposed to be from around the late 1800’s. And the Googled version was supposed to be from WWII, but I think both were simply props. Which makes total sense. After all, who wants to hand the star of your show a real bottle of nitro to play with!

Since I now decided I was making a prop based on a prop, I started by making up my own label which, while evocative of the “original”, didn’t have to match it 100% since the first is probably fictional as well!

Here was my version:

I looked around and found some small bottles that I thought looked good, matching the dark brown of the Savage Build bottles, but not the clear of the google listing. S’okay, I liked the brown bottles better and, bonus, they came with corks and a little funnel!

If you look above at the one from the show or the one from the listing, in both cases they seemed unreasonably clean and pristine. The label from the show looks beat up and not attached well, but the bottle doesn’t have a mark or knick or smudge on it. Anything that’s more than a hundred years old should look it!

I attached the labels by soaking the labels in milk and applying them and letting them dry. There is precedent for this approach and this may actually be close to how they may have done it back then, though I suspect their version would have stuck better because my non-fat milk didn’t have enough fat to really do a good job as an adhesive.

I used baby oil (it’s inert, it has a nice smell and if it gets out, eh, it’s just baby oil) to fill the bottles. Plus it’s less likely to evaporate if the bottle loses its seal. I have no idea how viscous nitroglycerin is supposed to be, but my version is closer to oil than water. I then sealed the bottles and the corks, to keep in all that baby oil goodness.

I also decided that my bottles needed some kind of cruft or buildup around their tops, indicating they’d been stored in some old garage or storage for a long time and perhaps there was some condensate or leakage at the top. I used a crackle paint and applied it liberally around the top and where the bottle meets the cork. It gave it a sufficiently crusty look and feel, which you can see in the first image at the top.

Once I had a dozen bottles, I realized I needed something to hold them. I could find any easy information on what a box for storing bottles of nitro looked like, but I decided in my version, they’d be close to a military ammo box, crossed with an old case for holding Coke bottles.

So, I built a box out of pine and stained it, and then sanded it to give it smooth edges and a sense of age. I also stenciled some lettering that I made up (one of the numbers for the serial number is my birthday in YYYYMMDD format) and then I sanded much of that away. Finally, I put on a hasp and hinges and then painted them as if they were badly rusted from years of poor storage. I thought this turned out pretty decent!

The final touch was to use Fuller’s Earth on the bottles in the case to emulate the dust that would have accumulated. This isn’t as effective as I was hoping, probably because I wasn’t patient with my application, but it’s in the right ballpark.

A fair question to ask might be: “Why did you spend all this time to make a fake box of fake bottles of fake nitroglycerin?” Fair question. I’ll just go with the easy answer: Because I thought it’d be cool. And it is! I built a thing that didn’t exist before from an idea in my head. It feels nice, the bottles clink when you shake the case. The case has a heft and feels like something that’s been around the block. And, it was fun. That’s good enough for me!

Here are a couple more pictures.

Just seen the Adam Savage show on UK TV and my mind started working in exactly the same way as yours, so I had a look on Ebay (in vain), then discovered your page via Google. Wow, what a brilliant job you did; just what I had in mind, and such a great help to me! Thank you – I just had to let you know that at least someone appreciated your efforts.

Thanks, Nigel! I appreciate the feedback and your reaching out. It was a fun project to complete. Take care and all the best in 2021! 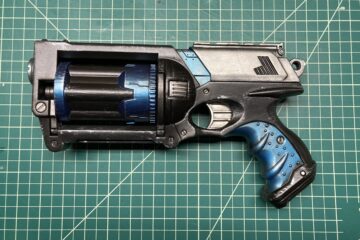 A few months ago I came upon a group of folks on the Internet who enjoyed painting Nerf pistols to make them more realistic or interesting. There is also a whole subset who are focused Read more… 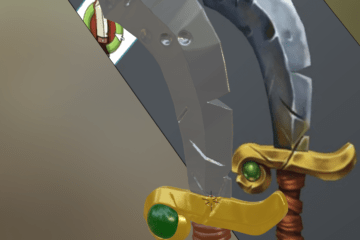 For years I’ve been interested in 3d modeling and animation. Pixar is an example of a company that has made real art from ones and zeroes and I’ve always loved their aesthetic and dedication to Read more…