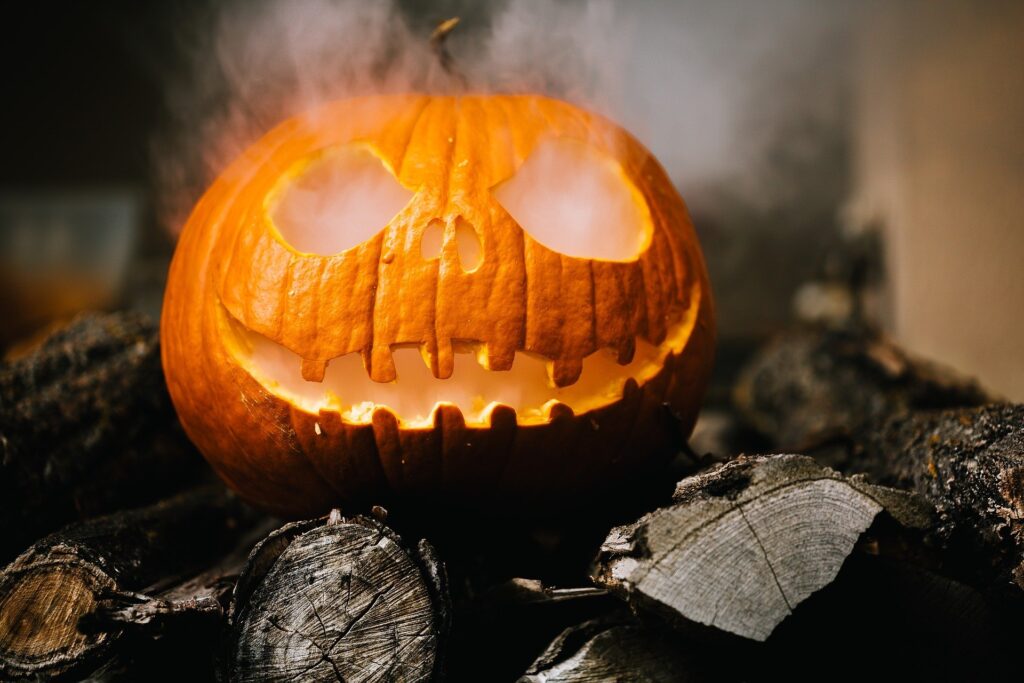 What will all the ghosts and ghouls, ninjas and princesses, superheroes and shy, little, first-time Halloweiners do in the face of a pandemic?!  Certainly, little goblins and large teenagers should not be going about in groups, taking candy from strangers and spreading the plague.  Though, to be fair, that might be fairly on point for the holiday.  And for 2020.

That having been said, I still wanted to build a couple of projects for Halloween, even if they didn’t get much attention this year.

In past years, I’d built a couple of large tombstones out of foam and I still have those and am happy with how they look.

So, what to add?  I started by wandering off to the local Spirit Halloween store for inspiration and all I came away with were a couple of plastic skulls.  The last two they had on that day.

For the first one, the one with the jawbone, I had this image of a demonic skull on riding around on a skeletal spider figure.  I may have seen something or maybe it was just a bad dream.  Who can know?  But, I knew I’d need a skull to start with.

I decided it needed horns, so I chose to see if I could find a pair of horns that I liked that I could 3d print.  For the Role Play Critters (and if you’re not, those last three words made no sense whatsoever together), you might recognize Jester’s horns, created by some kind soul, and printed at 65% size for my skull.

I attached the horns and also sculpted some additions on the skull using a sculpting material that air hardens overnight to add the brow ridges, some pointy teeth and a few other details that would make it look a bit more demonic.

The body was created by cutting out a flat rounded shape from a small piece of plywood. The legs were prototyped for length and shape with cardboard (Tip: Adam Savage) so I could get the proportions right. Then it was simply cutting up a bunch of shapes out of a 1″x2″ piece of pine and then shaping them with the sander. Connections were made from one piece to the next with a bolt and wingnut and some washers.

I wanted to paint my own scheme, which I thought would look better than what was on the original skull.  Then I went to town with lots of colors, wiping most off, trying to make it look aged and decrepit.  I was pretty happy with that stage.

At that point, it could have been enough, but it just … wasn’t. I decided it needed some demonic eyes.  I could have just put a couple of LEDs in there, but I thought I could do better.

I prototyped a couple of Flora NeoPixels driven by the Gemma board, all from Adafruit.  This is a little microcontroller that can be driven off just a couple of watch batteries (CR2032), so the computer and the lights would not need to be plugged in.

I then designed and 3d printed an enclosure for the eyes that would protect the little bits of electronics and designed them so I could put a plexiglass lens over them to protect the top as well.  Those were cut from plexiglass by the laser.  The small holes at the back are for the four lead wires that connect to the other eye and the microcontroller.  Once the bases were secured, the wires pass through, back into the skull and are stored inside the skull with the microcontroller.

The next step was the software.  That was fun!  With the NeoPixels, you can address each individually and assign a color (RGB, 8 bits each) and brightness and alter those over time using the microcontroller.  I had fun coming up with some little routines for the eyes to do, from pulsing from black to bright red to back, to looking like the eyes were blinking or just doing some fun color shifts and patterns.  The whole thing is run off a random number generator so that it loops through, picks a routine, executes it then loops again, so it doesn’t look preset.

The final touch was to build a little saddle for the head to support in on the spider body and I made that from some plastic skeleton hands because, well, creepy!

The body of the spider was simply painted black then bone white in the middle of the bones until it looked sufficiently nightmare inducing.

And here’s a shot of the skull with software running a bit of a couple of routines.

For a final bit of support, I wanted to have a spotlight of some sort to direct attention to the tombstones and the demon spider.  I headed to the Dollar Store and purchased a few cheap LED flashlights and some cheap batteries.  Now I just needed something to hold them, so I again designed something in TinkerCad and 3d printed the parts.  The two halves of the stake needed to be secured together (some 5-minute Epoxy) and then a bolt and a wingnut secured the position.  Then I can just turn on the flashlight/spotlight, drop it in the cylinder, push it into the ground and instant spotlight!  I was very happy with the results.

The final project was a quickie with the skull without a jawbone.  I painted it and then cut off the back of the skull, which hollowed it out, but would also allow it to sit flush to board for the next step.

On the oval, I tried a new (to me) technique where I painted the oval black, then painted on a layer of Elmer’s Glue, let it set up and get partially dry, then covered it with grey craft paint and hit it immediately with a hairdryer.  The drying craft paint and glue cracked in a nice way leaving the black showing through the cracks.  After it was dry, I hit the whole thing with a white drybrush and called that part good.

On to assembly!  I added a hanger on the back and drilled a hole behind where the skull would mount and put a hanger on the skull so it could be removed.  I secured the bats and the sign.  It looked good but needed something a bit more.  So, I got some cheap lights, also powered by a watch battery, and secured them behind the sign and inside the skull (in to which I had drilled a couple of holes above the eye sockets) so the red lights would provide some drama!

We have put up the sign, I’ll put out the tombstones and the demon spider and we’ll probably put out a bowl for the ghosts and ghouls to help themselves to so everyone can stay socially distanced and call it a Halloween!