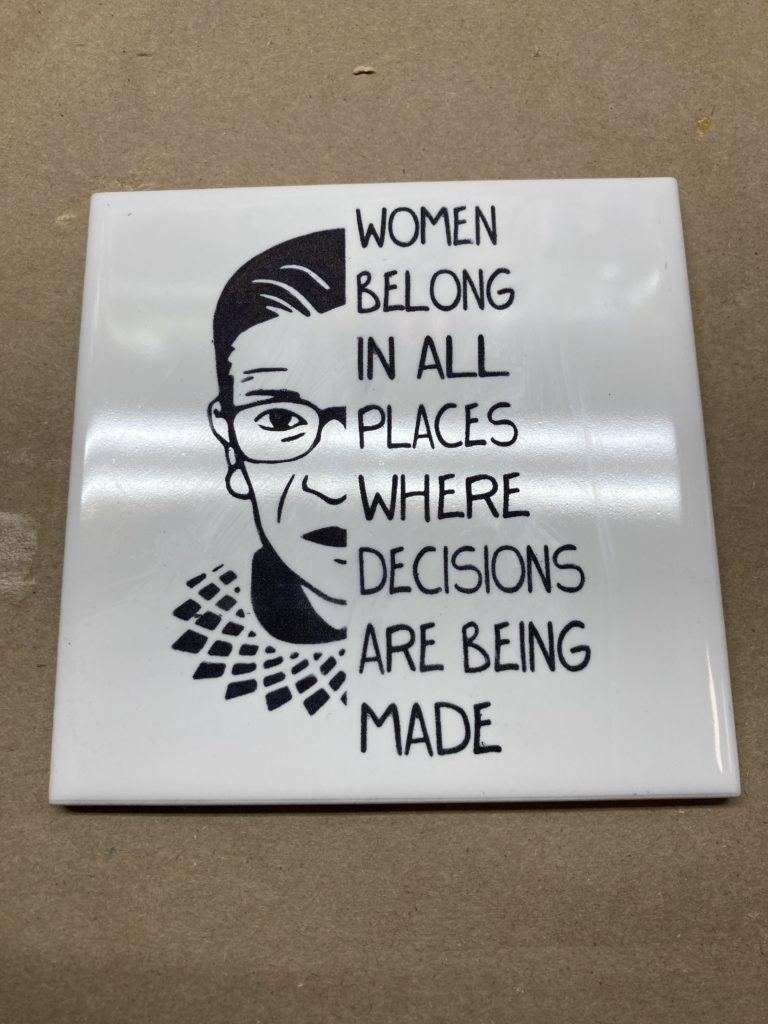 With the recent passing of Ruth Bader Ginsburg, I was trying to think of something to honor her work and her legacy.  At the same time, I’d been thinking about a new project idea involving using the laser to etch a tile and the result was this project.

It started by looking for an appropriate starting material.  I landed on a 4”x4” ceramic tile from Lowe’s that is only .15 per piece.  At that price, I can mess up several times with little concern.  Which is perfect.

I bought several (okay, 60 of them for less than $10 – they might go away!) and got home and began experimenting.  Adding in some tips from the Glowforge user forums and I decided that the tiles would work great at 100% power and a speed of 1000.  This gave a good etch and ran me about 20 minutes per tile. 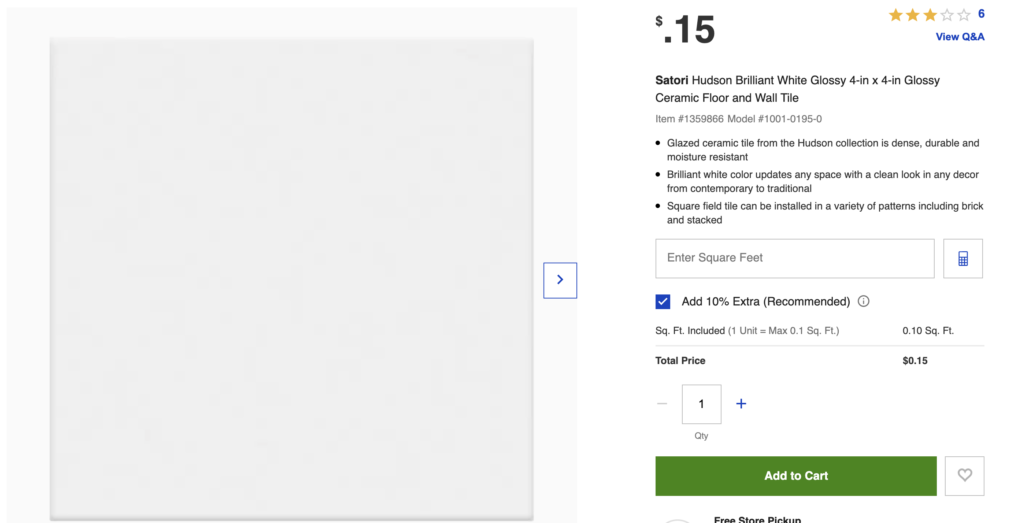 I did add a layer of masking tape to the top of the tile, initially because I thought it might need  protection – when you use wood, the charred wood dust can discolor your material.  In the end, it didn’t need any protection, but it did make adding the color much cleaner as it did mask the top material from taking on the color.  I discovered, based on a recommendation from someone who uses it regularly that Scotch Masking Tape for Delicate Surfaces works great for this and masking in general.  Even better than blue masking tape, my usual go to. 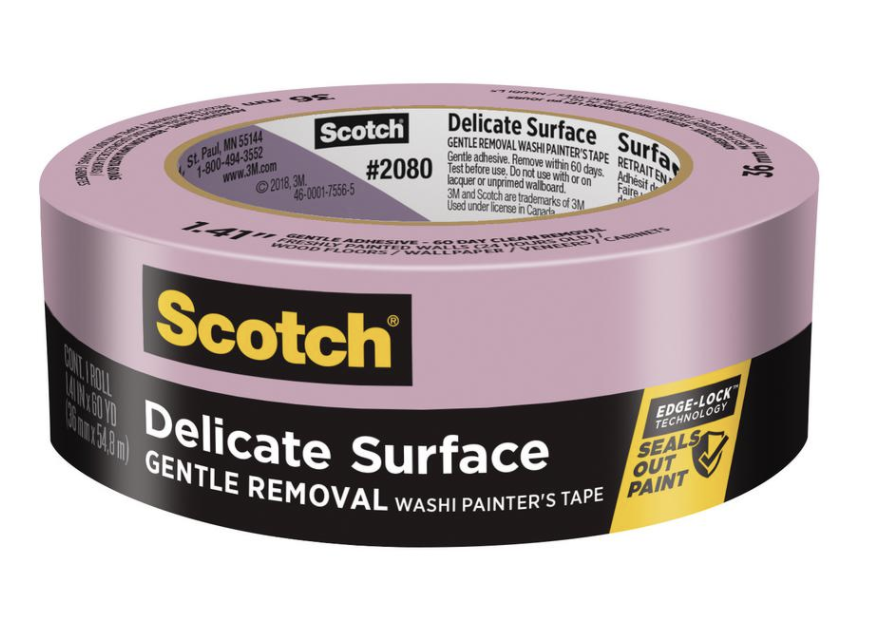 My next stop was to find some RBG svg files to help quickly come to a design I liked.  Then it was off to Affinity Designer to come up with a couple designs I liked. 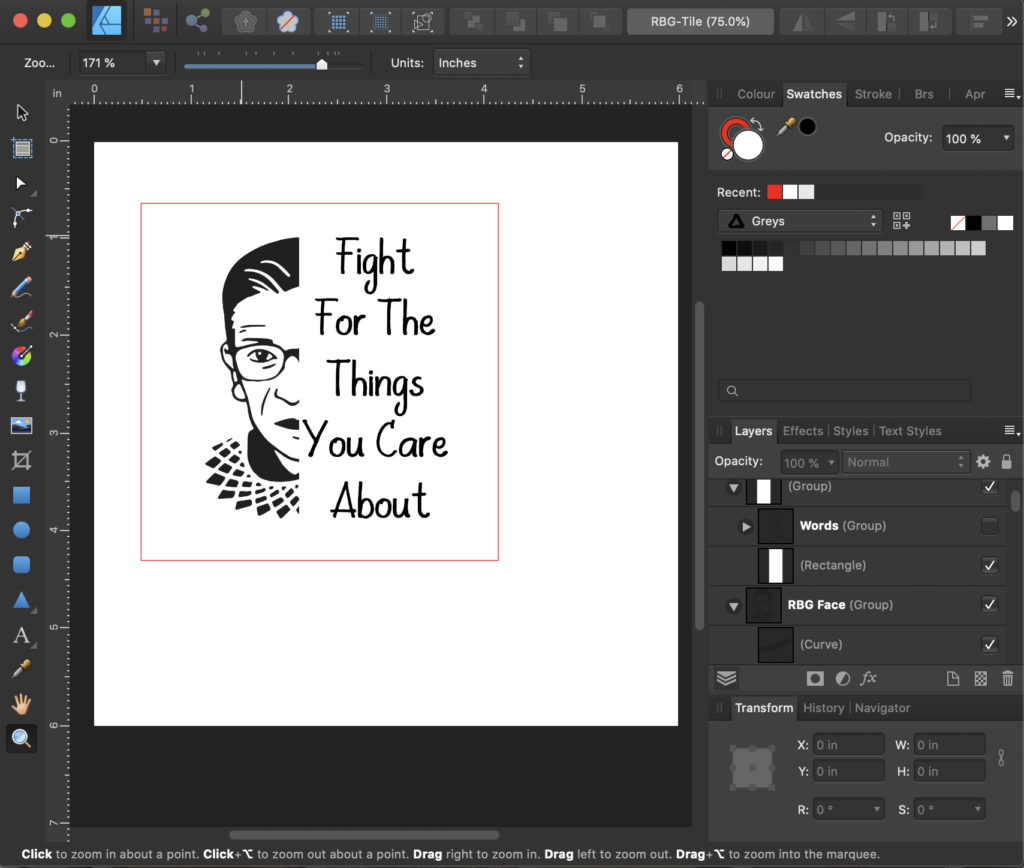 At this point I was planning on making a few: a couple for me, maybe one for my daughter and one for my wife.  I asked Christina if she’d like a couple and she asked how many she could have and I just replied with “Whatever”, at which point she asked for 10-12!  So, my production schedule got pushed out a bit to make the tiles, but it was time to do some etching!

The result of this is a nicely etched tile, covered in masking tape with only the area to be colored gone from the tile.  Which is perfect for then adding the color. 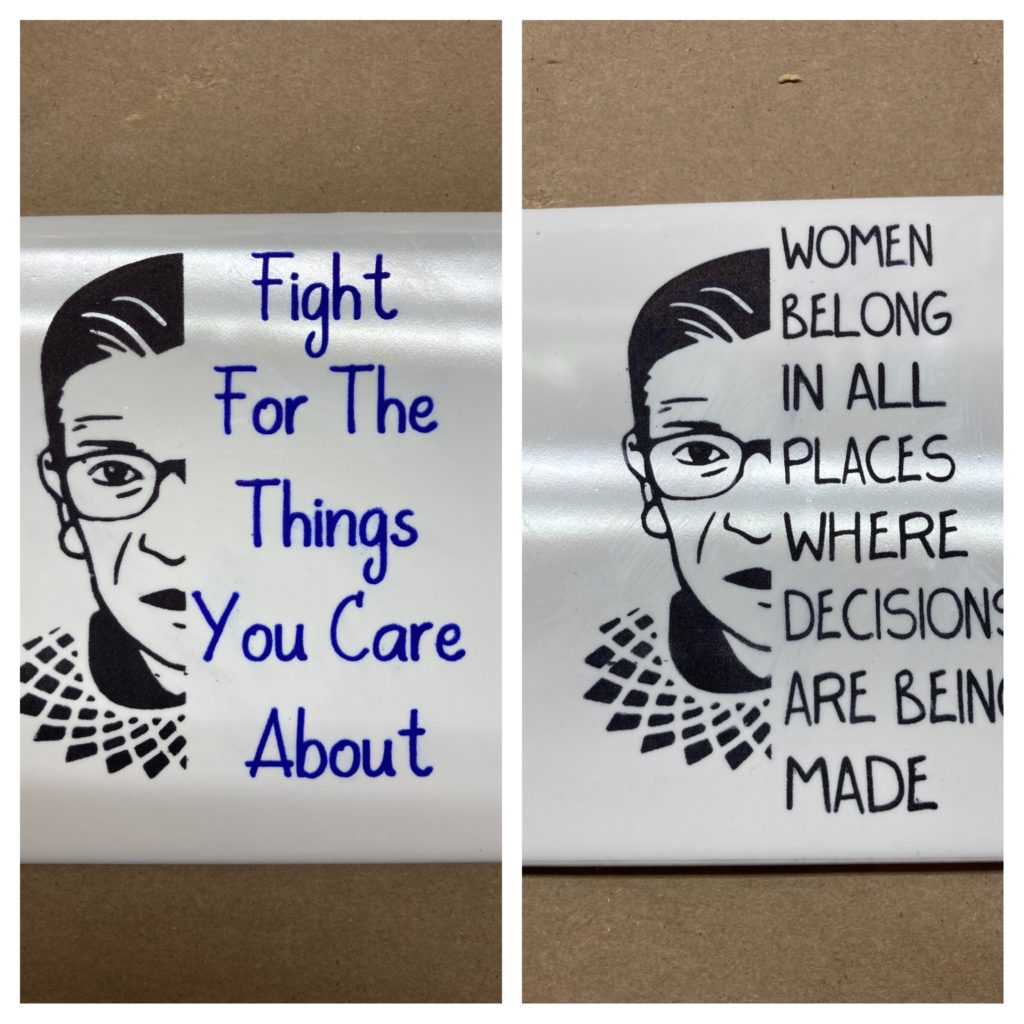 The initial attempt was colored Sharpies, which are permanent.  So the next step was some fun coloring projects as Christina and I came up with fun color combinations. 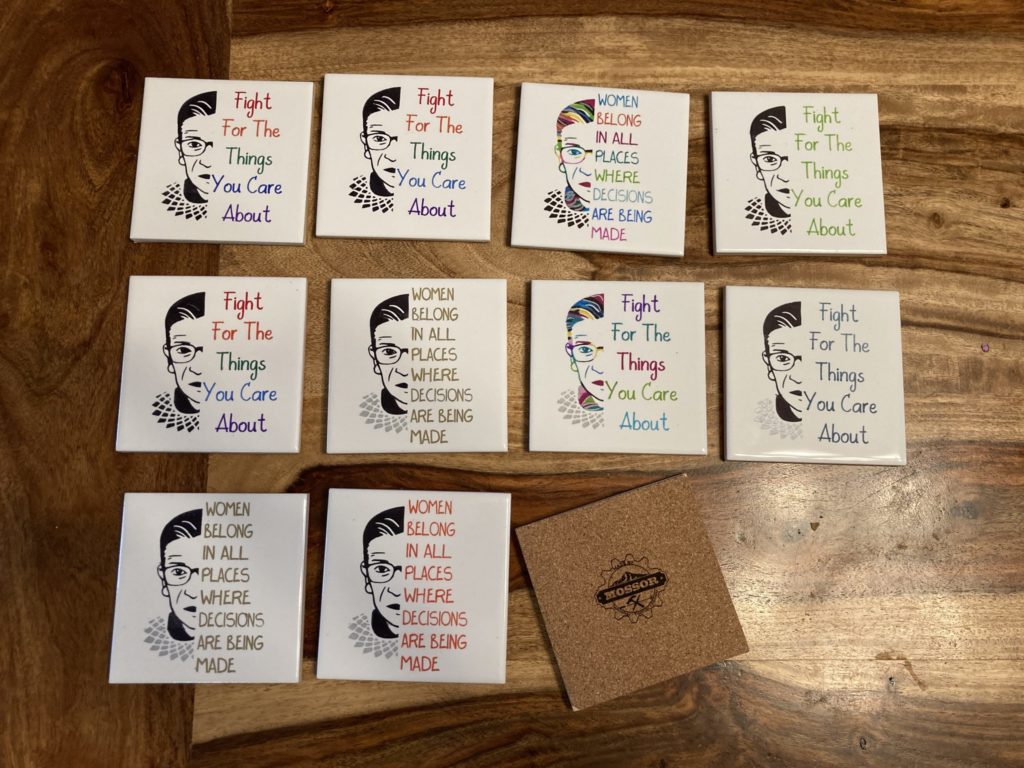 After letting that dry and removing the tape, there was just a bit of work to wipe any remaining color from the ceramic surface.  It’s worth noting that even this could take out some of the color if not careful.  So, not *that* permanent. 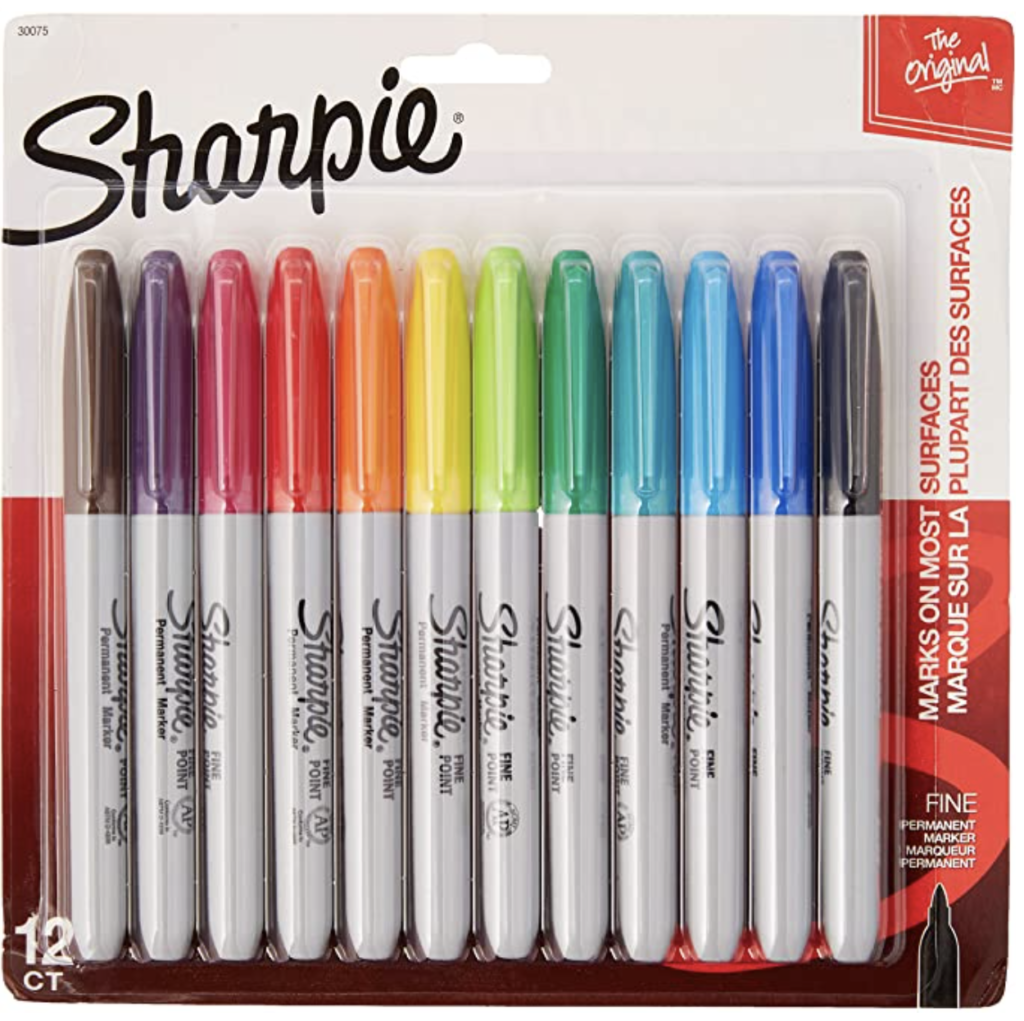 Later, based on a recommendation, I did try some oil-based paint markers under the theory that they’d stick to the etching better and not wipe off easily, but in the end it seemed these weren’t entirely permanent either.  So, some care was taken.

The final part I wanted was some kind of a top coat to seal in the color, in case the tile got wet.  Here I came up short.  I tried several things including a floor sealer, clear acrylic sealer and a Krylon sealer.  I wasn’t happy with the result of any of these.  Even the gloss material tended to leave a spotty textured top coat on the ceramic.  If I put too much sealer on it, it would pull the color up from the etching and deposit it on the surface (under the sealer), effectively ruining the tile.

In the end, I left them unsealed, so some care will have to be taken.

The final step was to add a layer of cork to the bottom.  This is just 1/16” thick, so it would tear if care was not taken.  I etched my logo on the bottom and glued them to the tiles with a layer of PVA-based glue. 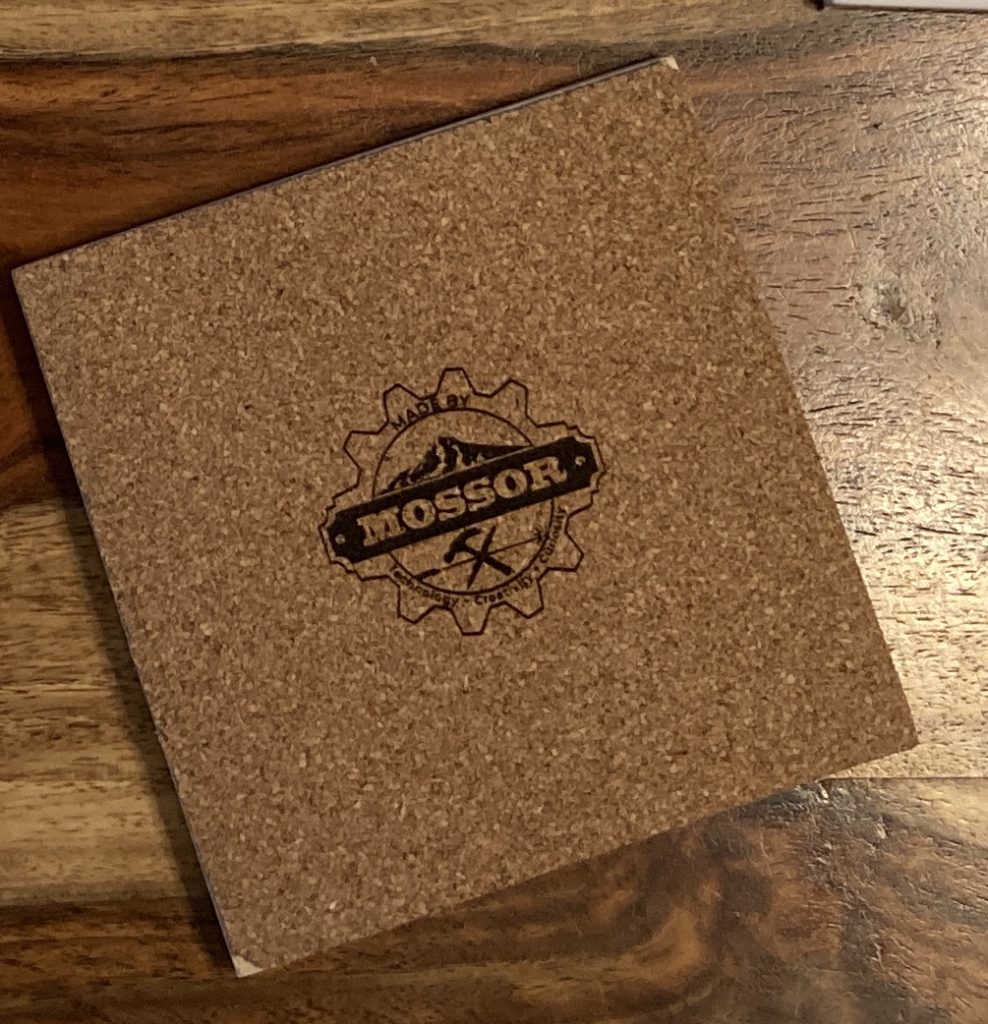 Now they’re ready to go out as gifts and this project is a wrap!