I was perusing images on Google looking for something that I might make which wasn’t too large.  The idea is it should be something I might use when next I GM our role playing group.  I wanted something that you might put on a table, might advance/enhance a story, might have more than one use.  And, I saw this image and thought it was kind of cool.  Looked like it was something ancient, something that had seen the passage of time.  Best of all, I thought it was simple enough that I might do my own version.

The material of choice for something like this (according to what I’ve learned) is XPS foam or eXpanded PolyStyrene.  It’s found in big box hardware stores and is usually either Pink or Blue and comes in various thicknesses and usually in very large sheets.  I’ve been learning how to make with this stuff and I’m getting better.  It does have its limits.  For example, in the original image you’ll note the very detailed runes on the two surfaces.  I think this is just a rendering because I’ve not clue how to get that much detail, but the detail isn’t the most important part.

Basic construction (of mine) involved a couple of thin squares scribed with fake bricks topped with a thinner, smaller piece to form the base.  Then I cut a roughly 1″ square piece that was longer and cut eight pieces a few inches long.  I cut the tops by hand and the angles on the top of mine are a bit closer to 45 degrees than the original pic.

I glued the bases together and inserted a toothpick vertically to provide some additional support and then inserted the vertical pieces on the toothpick and added some glue.  That’s the basic construction.  From there, it’s making them look old.  I did multiple things: I sanded down some edges to simulate smoothing over time, I nipped out pieces with a small needle-nose pliers, I cut cracks.  Basically I attempted to abuse them till they didn’t look new any more.  Oh, and I made some big, old runes in them because it looked good.

Then comes the painting.  After an initial coat of a primer/strengthener (called Mod Podge), I gave my obelisks a medium coat of a brownish color.  Then I added some lighter accents via dry brushing.  Finally, I put on a dark wash to provide some additional aging and put some darker tones in cracks and crevices.  Finally, I tried some flocking for the first time to simulate the moss.  They still need a final coat of a satin polyurethane to seal and strengthen them, but I’ll have to wait for warmer weather to do that.  I will probably also put them on a 3d printed base with a washer underneath for additional ballast as they are very light on their own.

I like how they turned out.  This wasn’t a big project, but as I only have spare time to work on them, it still took a while to complete.  And, the next time I’m in need of an obelisk or eight, I’m ready! 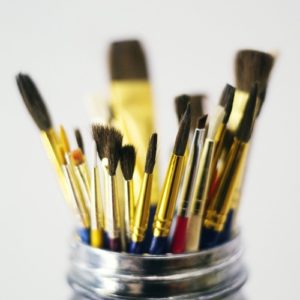