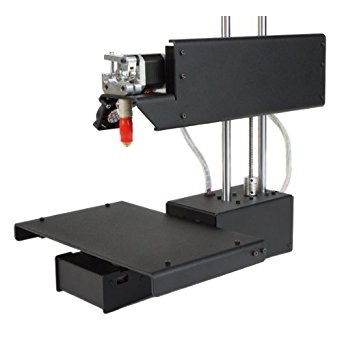 One of my goals for the year is to document some of my projects. Adam Savage of Mythbusters fame is credited with saying “Remember kids, the only difference between screwing around and science is writing it down”. Side note: according to Adam, it was actually Alex Jason, a ballistics expert working with them on one of the episodes. In any case, my head variation is “The only difference between actually doing something and fooling around is writing it down”. To that end, I’ll do some little after-project write-ups from some of my little side projects by way of differentiating between fooling around and whatever results I get, good or bad.

In this case, I was talking with the GM (Game Master) from our weekly Game Night and we were chatting about things including my 3D printing and I was lamenting that I hadn’t done much with it lately. He noted that if I was looking for a project, he would like small, stackable elements that he could use to differentiate players or non-players and the various elevations. This comes up because it’s easy to forget something was up in the air or how much versus a simple 2D position.

The conversation stuck and I started noodling and thinking about designs. So, step 1 was sketch and this is what I came up with: 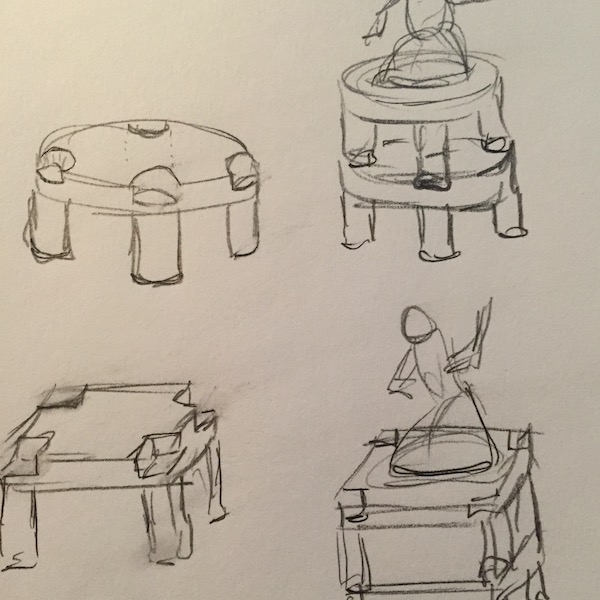 As I started to think about how a 3D printer works (think of squeezing out a tube of toothpaste with a very narrow mouth, but instead with melted plastic and in 3 dimensions), it turns out it’s kind of tough to make something flat like the sketch standing on legs, because the printer prints in layers from the bottom up and going from legs to the platform will not work easily. I then realized I could flip it over and print the top surface first and the legs last and suddenly I had a plan.

The next step in prototyping is building a model. In this case the easiest and quickest solution was to build it using TinkerCAD. TinkerCAD is free, online CAD software that has enough functionality to do what I needed. So, after coming up to speed on the UI and how it worked, I started knocking out the design. In a CAD program, what you’re building is a series of shapes/solids and other shapes that act as holes which you use to cut, well, holes or shave pieces off the solids. 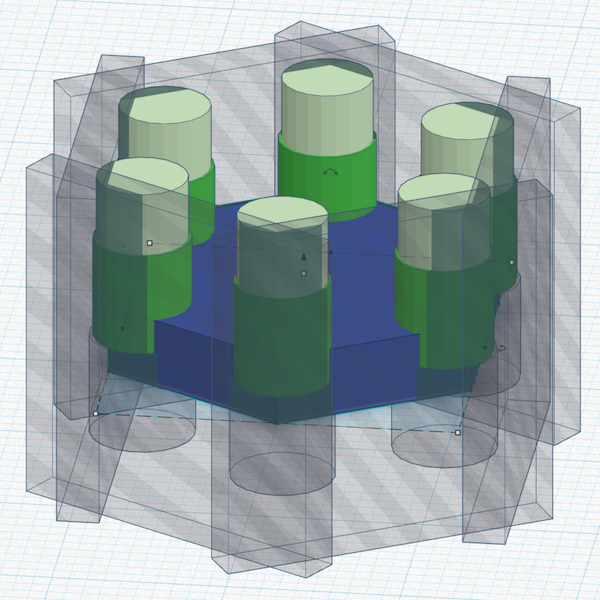 Or, rendered as a solid: 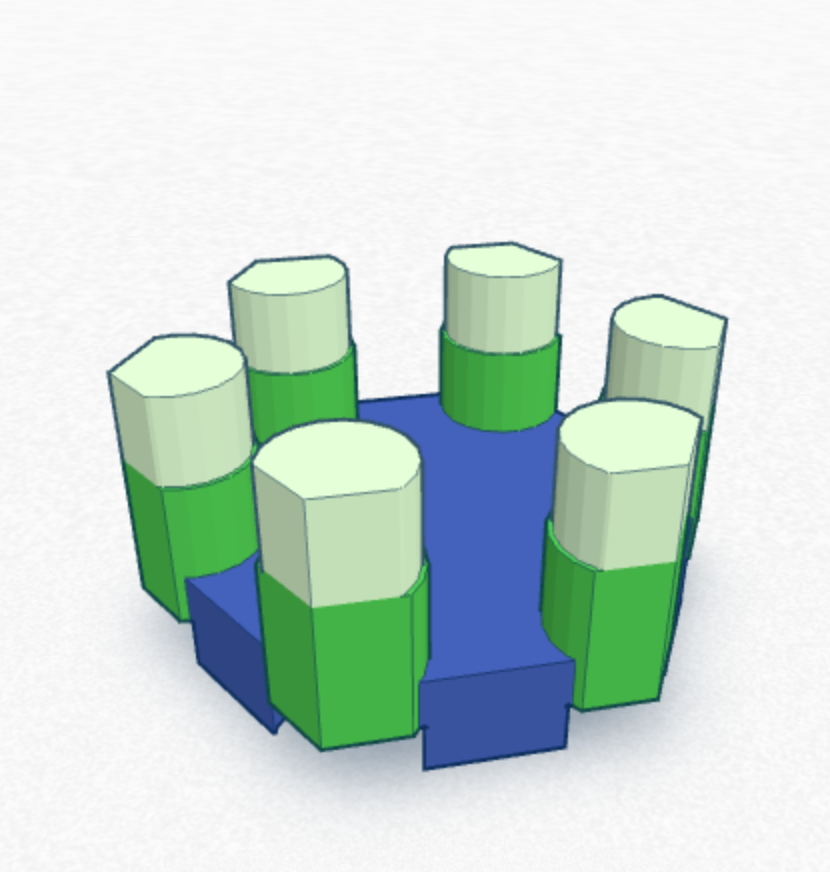 Now, with that, I can export that information in a file format that the 3D printer understands (typically a .STL or .OBJ). Next I import that file in to the software which communicates with the 3D Printer (in this case, Cura). Cura is used as a way to set up the print, describe options like quality and other obscure things like infill, whether to use support structures, etc. Once I was happy with those, I hit Print and wait 20 minutes for the results (and hope the 3D print doesn’t come loose and waste 20 minutes and the associated material).

Even with that, there’s a difference between what you picture in your head and what works in reality. In this case, what I determined after iterating on the design a few (like, six) times is that what I really wanted were legs that were narrower than the holes they fit in to to allow easy stacking that felt connected and wasn’t sloppy but you also didn’t have to force. So, yeah, only six or seven tries.

Before I offer the end result, I’ll show what I’ll call my Pile of Sadness. This is a combination of failed iterations and failed prints. This is what the middle bits between idea/inspiration and a working prototype look like: 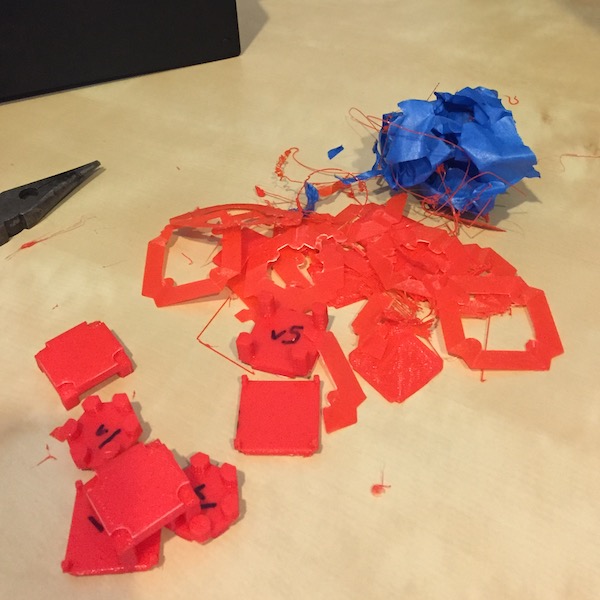 The result, though, was pretty good. I was happy with it and will print up a number of them for our GM to use (or not) in our game. Because, in the end, it was really about making something that didn’t exist before as much as it was about solving the problem. But, solving the problem (satisfying my customer) also feels good. 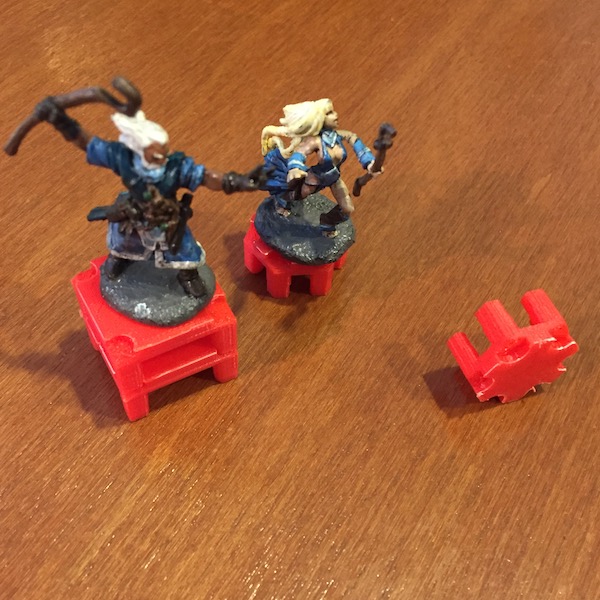 And, as an additional bonus for lasting this long, here is a print I did just for fun of Baby Groot. (Design credit to Tom Davis and the model found on MyMiniFoundry)
Note: This will only be cool if you know the Guardians of the Galaxy movie and its sequel. 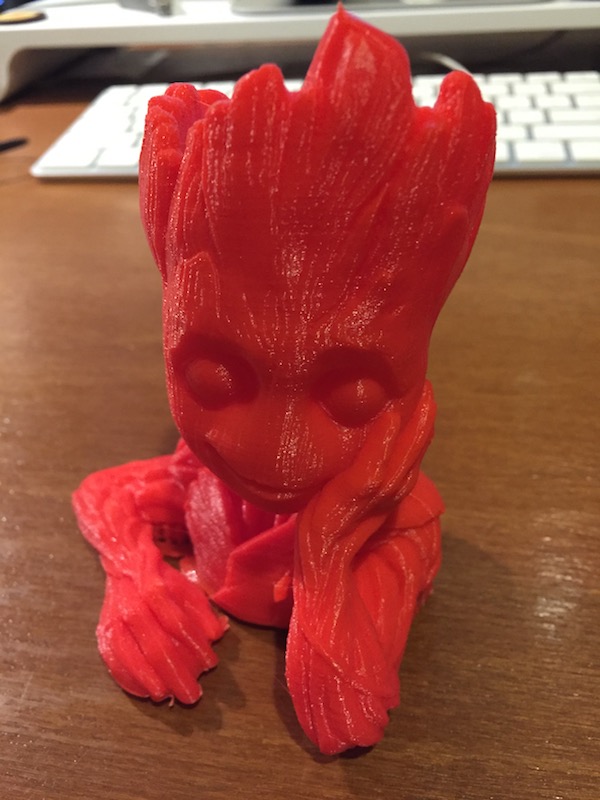 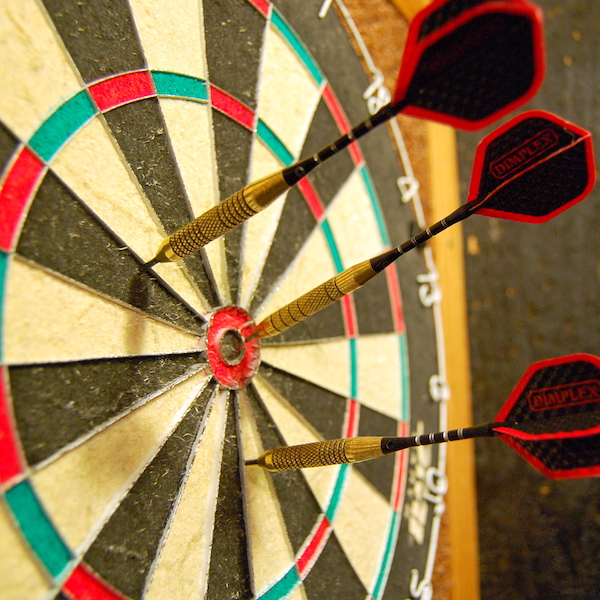 Rather than make resolutions, which tend to be a bit trite and are typically abandoned soon after making them, I thought this year I’d try to make some specific and concrete goals for 2017. I’ve also read that one way to make yourself more accountable for those goals is to share them since it add accountability, even if it’s imagined accountability.

In my experience, goals benefit from being SMART. Variations exist, but for my purposes: Specific, Measureable, Achievable, Realistic, Trackable. The last, T, could have been Time-based but since these goals are for 2017 and therefore time-based or time-bound isn’t relevant, but trackable is.

That means there should be some sort of regular check in for progress. I’m choosing monthly as a period because it’s enough to show progress but not so much that I lose focus.

Goal 1: Health
What: Get my weight down to my target goal and keep it there on my scale and maintain for at least three months.
How: Adjust diet, get more consistent exercise, maybe add in some resistance regimen.
When: By 7/1/16
Measurements: Weight (Withings Scale/App), Blood Pressure (Cuff/Manual Entry), Data from phone/app
Specifics:

Goal 2: Tech Refresh
What: Pick something to refresh and take a(n online) course.
How: Set aside a chunk of time weekly to work through this. Maybe a few nights a week or four hours a week on the weekend.
When: By 7/1/17
Tracking: Completion of the Courses

Goal 3: Read some non-Fiction
What: Read 6 non-Fiction books this year. Any subject, any (reasonable) length.
When: By 12/31/17
Tracking: Addition to Books:Reading Log

Goal 5: Volunteer
This is a stretch goal and I won’t hold it against me if I don’t do it, but it seems like a good thing to have as a goal for the year. This one will not be tracked monthly

Note
Image courtesy of https://commons.wikimedia.org/wiki/File:Darts_in_a_dartboard.jpg and is a Public Domain photo. 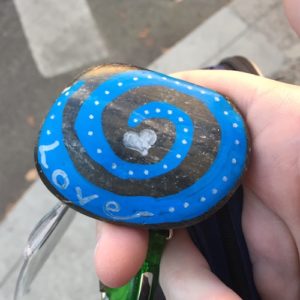 Have you heard about Vancouver Rocks? Here’s a story from the local paper. Here’s the Facebook page which describes and shares some of the creations.

Basically folks have been painting, hiding and finding rocks up in Vancouver where I live. My wife told me about it after she became aware of it. One weekend morning a few weeks ago we wandered Orchards Community Park for my first time and looked for rocks. We each found a couple and had a really nice walk exploring a new park. Also met a couple of other rock hunters who were thoroughly friendly and enjoying the hunt.

We had so much fun with it we even painted a some rocks ourselves to hide when we get a chance. Christina already hid a few of them. Here are a few we have left and one of the rocks I found on my first adventure. (I painted the Princess Leia. It’s my favorite.) 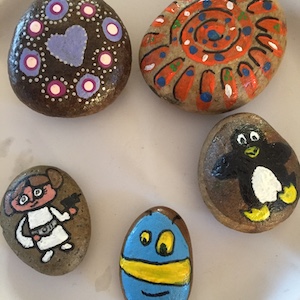 This last week, as I was exiting my parking garage in downtown Portland, some color caught my eye and I spotted the rock up in the cover photo. And with such a simple message: Love.

I’ll probably hide this somewhere else downtown just to spread the fun.

I feel it’s this kind of act of creation coupled with the serendipitous and unexpected joy of discovery that can offset many of the realities of life that may get me down about current events and helps offset some of the fear I have of the future.

Here is something that is a purely positive event which takes place in the real world. You find a rock, you celebrate. You paint a rock and someone finds it. One person gets the joy in the act of creation, another the joy in discovery and maybe the pleasure that comes with re-hiding and hoping someone finds it as everyone moves forward putting that positive energy back out in the world. From one small act, many ripples can occur.

There’s no great reason for it, there’s no message or goal, it seems, other than to create moments out in the real world between people who will never meet but still find a way to communicate with each other.

How wonderful is that? 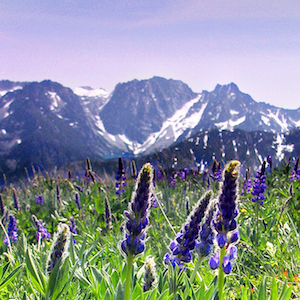 Let’s start off the new year with a picture of a pretty meadow as way to be mindful that as much as 2016 could be described as many things, not all good, we also have things to be thankful for.

My list revolves around family and my kids and my own relationship. We also made progress on some financial goals we wanted to get resolved in 2016, though it took much longer than expected. While there were certainly nights of shaking our heads, some insomnia around fear of the future and certainly frustrations, on balance I remain a fortunate man who is working to be mindful and appreciate my life.

I’ve been giving some thought to personal goals for 2017. I haven’t decided if I’ll write them down or make them public, but I’m leaning that way.

For no good reason, it appears I haven’t written anything worth posting for almost 18 months. Just the way it works out.

As it is the new year, I put a new coat of paint on the site and may tweak it a bit more. The top domain page hasn’t changed in far too long, so I should think about that.

Looking at the site, it does have me wondering whether it serves any purpose aside from self-gratification. Once upon a time, having your own site was akin to staking out your own corner of the new World Wide Web! It was virtual real estate. The reality today, though, is that aggregation to places like Facebook, Twitter, Instagram and Snapchat have shifted things away from words but also away from personal sites more towards these controlled publishing venues.

I’ve made clear before that I really, really don’t like the Facebook model. It controls who sees my content, not even guaranteeing that people who I have explicitly indicated are Friends will see the content, but those same people will certainly see ads inserted inline every four or five stories. Similarly, Instagram is inserting ads in my streams. Frankly, I don’t get Snapchat, which officially makes me an “old”.

The best argument I’ve heard for continuing to publish on my site is that I own the content and presentation. That’s not exactly a compelling argument since I’m not writing for a wide audience, but it’s at least an argument for paying the $10/mo to have it as an option.

That’s it. I’ve got no great point other than to write something here and get 2017 kicked off. Here’s hoping you are able to make this year everything you want!